Youngsters at a Leamington primary school are able to learn new cookery skills every week after a generous donation from a property development company.

Radford Semele C of E Primary School in School Lane, Radford Semele, has transformed one of its ICT suites into a teaching kitchen.

Warwick-based AC Lloyd contributed £10,000 towards the £16,000 project to create the latest addition to the school’s classrooms for its 214 pupils from reception through to Year 6 to enjoy cooking as well as students who attend its breakfast and after school clubs.

“The kitchen was completed in time for the start of the new school year and the children have already benefited greatly from having the space and equipment to cook hygienically and safely while at school,” she said.

“The teaching kitchen is even better than we hoped. It is a fully-functioning kitchen with an oven and a hob and all the utensils that you need.

“It is fantastic to have a purpose-built area which allows us to teach the full technology curriculum in every year group.

“Before we were using the staff room to cook the dishes children had made and using an extra classroom for preparation so to have a modern, dedicated room is perfect.

“Year 6 pupils have made Victorian biscuits as part of a theme they are currently working on and the after school club students have made pizza for their snack instead of sandwiches which they said was delicious.”

She added: “We have been overwhelmed by the support of AC Lloyd and we are extremely grateful.

“This is a small school and it would have taken years of fundraising to have reached the amount we needed to create a teaching kitchen.

“It is a project that will benefit the school and our community for many years and without this kind of donation, this wouldn’t have been possible.”

Alistair Clark, managing director at AC Lloyd Homes, which is creating a 67 homes development nearby called The Cricketers, said it had been lovely to meet several of the children who were enjoying using the teaching kitchen.

He said: “The Parents’ Teachers Association asked if we could help with a donation and we were more than happy to help since this kind of project will make a big difference to Radford Semele C of E Primary School.

“Programmes such as Junior Bake Off and Junior MasterChef have increased the popularity of cooking and it is great to learn these skills from a young age.

“The teaching kitchen is really impressive and it is great to have made a difference since this will be used by hundreds and hundreds of pupils in the years to come.” 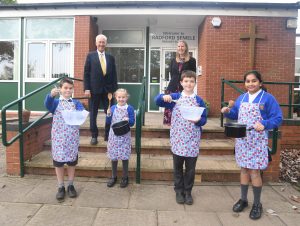